For this weekend’s classic cocktail, I thought I’d post a take on perhaps the most classic of of classics, the Old Fashioned. The Old Fashioned is, of course, any cocktail that contains liquor, bitters, sugar, and a diluent (generally water or seltzer).

Those who know me know that I have a fascination with shrubs. I started researching them about a year ago, and was debating opening a shrub company, something I still haven’t ruled out. I began honing my recipes. My problem with most shrubs on the market is that they pretty much all use apple cider vinegar, with the occasional balsamic tossed in. Not that I have anything against ACV, but there’s just no way it’s the ideal vinegar pairing for every fruit. In fact after testing, I’m not sure it’s the ideal vinegar pairing for any fruit.

So I began playing around with different methods (cold press, for instance, seems to beat hot methods every time) and fruit/vinegar combinations and ratios. My favorite recipe so far is the Orange and Craft Beer Vinegar Shrub. (While vinegar made from beer strikes people as weird at first, when you point out to them that they’ve mainly been exposed to malt vinegar, and that beer is fermented malt, they realize they’ve been using it all their lives.)

In recent years, muddling oranges and cherries into an Old Fashioned has become popular. Cocktail purists of course scoff at the idea, but let’s be honest, when done right it’s damned tasty. That gave me the idea of using a little orange shrub, since it’s both a sweetener and an acidulant, which I think is the real reason the orange works so well in the Old Fashioned.

Another thing I thought I had invented (but it turned out Ideas in Food beat me to it) was toasted corn husk bourbon. A bar/restaurant I used to frequent wanted some members to contribute infusions to their menu. It was around the end of the summer when they first proposed it to me, and I’d probably been grilling corn in the husk. Anyone who has ever done that will tell you that there’s a sweetness to the smell (there must be sugar in the husk) that seemed like it would pair well with bourbon.

So I went down to the produce store and asked if I could have the husks people had shucked from the corn into a little bin. I expected them to think I was crazy for asking for what they viewed as garbage, but apparently people do this all the time to feed their goats. Who knew? They were happy to oblige, especially once I told them it was for beverage purposes.

With that I made roasted corn husk-infused bourbon. It has a small but beautiful sweetness to it that you almost can’t tell is there until you taste it with regular bourbon side-by-side. I thought it would be perfect for a drink like an Old Fashioned or a Perfect Manhattan. (A regular Manhattan would be too sweet.)

So, last week, I made the Toasted Corn Husk Bourbon and Orange and Craft Beer Shrub Old Fashioned. Yes, I know, that name is like 5 words too long. I’ll work on it. But for those interested, here’s the recipe, in 3 parts.

1. Peel the oranges, being careful to avoid the pith. (I use Pectinex Ultra-SPL enzymatic peeling for maximum removal and minimum effort.)

Here’s an image from Dave Arnold of the result:

(I don’t bother with the supremes since I’m juicing the orange, just the peels.)

2. Juice the oranges, double strain, and put in the refrigerator.

3. In a non-reactive bowl, cover the peels in a volume of sugar equal to the volume of juice you reserved. Stir, cover in plastic wrap, and let sit on your counter overnight. You’ll wake up to a beautiful syrup called oleo saccharum.

4. Mix the olea saccharum with the orange juice, then add an equal volume of Craft Beer Vinegar. I use Tavern Vinegar because they’re local and easily the best vinegar I’ve ever had, but your local food scene might have something comparable. If not, your local homebrew store probably sells mother of vinegar, and you could easily make your own by buying (or brewing) a nice Belgian Wit and then converting it to vinegar.

5. Let sit in your refrigerator for a couple months in a sterile bottle or mason jar. (You can sterilize it the way homebrewers do, but running it through your dishwasher with no soap or Jet Dry.) The flavors will meld into something indescribably beautiful.

Corn Husks (use the soft inner peels, like you would for a tamale, not the rough outer ones)

Bourbon (I like Four Roses Yellow for infusions, since it’s cheap and tasty, but your well bourbon of preference will do.)

Lay corn husks flat on baking sheet. You’ll probably need to place a cooling rack over top of them to keep them flat, as they’ll want to curl.

Toast in your oven at 350 until they brown and emit a sweet smell.

Put into a mason jar and cover completely with bourbon. I infused for about two weeks before I felt like it was done, but taste as you go along. It doesn’t hurt to have a reference bottle of bourbon beside it so you can detect the flavor change. 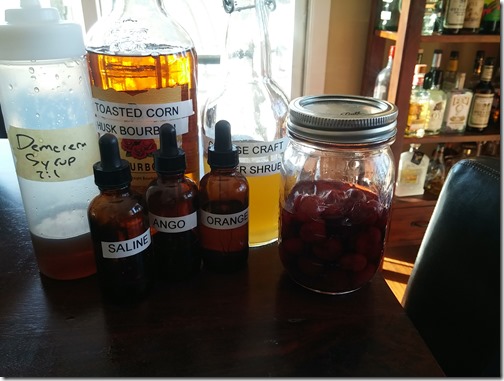 Put a 2” cube of ice in an Old Fashioned glass. Top with all of the liquid ingredients and stir to combine. Garnish with cherries.