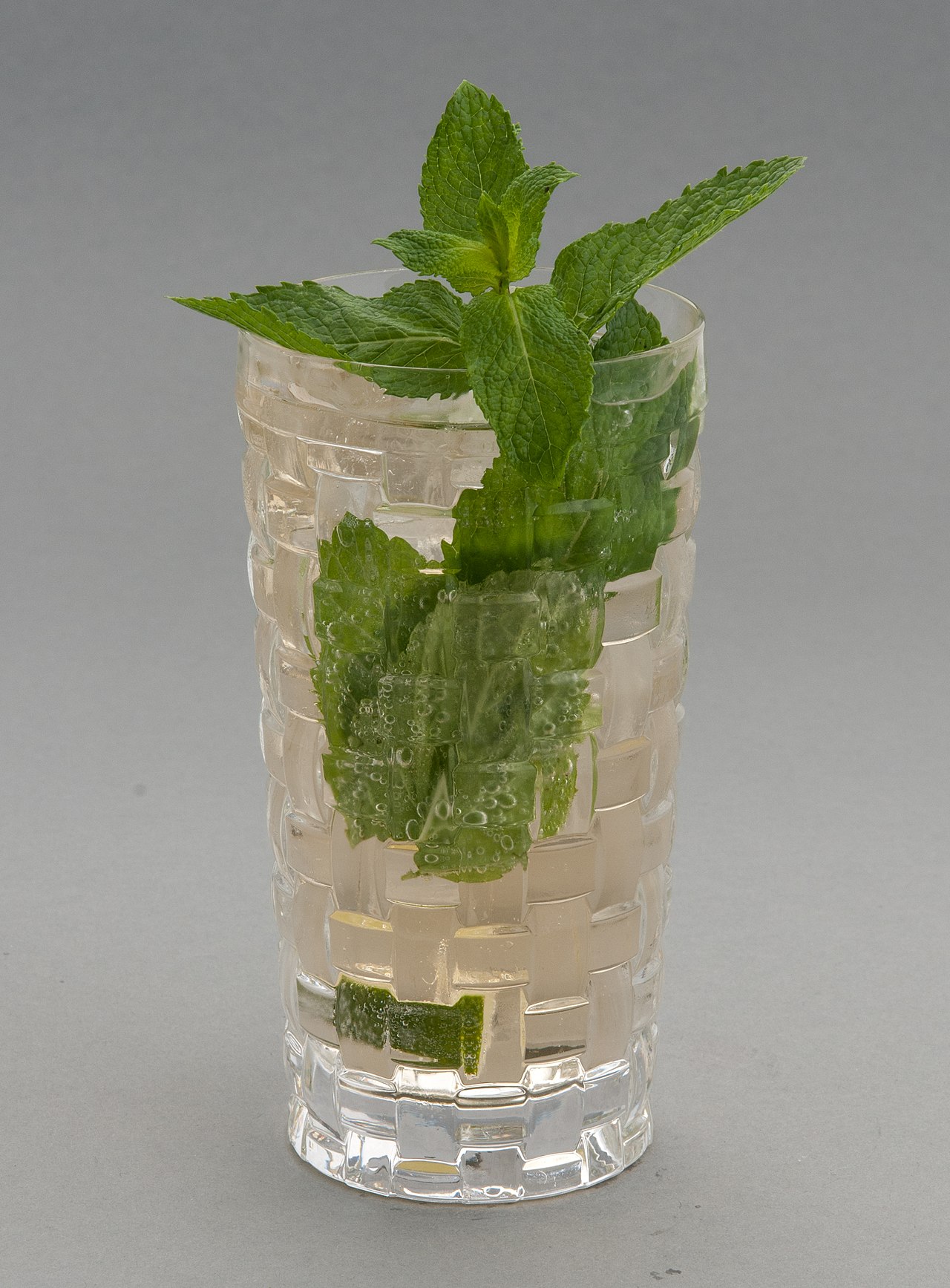 This post is going to have a slightly different format than I intend for this series to generally. This particular recipe has eluded me for so long that I honestly wouldn’t want to bore you with every variant I came up with. There were just too many, and all to replicate a simple cocktail. Oftentimes something that’s really hard to make one of is really easy to batch, like a Ramos Gin Fizz. This one, however, is the reverse.

My white whale of batched drinks is, undoubtedly, the mojito. It took me several dozen attempts over the course of two years to get one I feel confident serving. It’s still not 100% where I want it to be, but it’s close. Damn close. A-couple-tweaks-and-I’m-there close.

One of the reasons I set out to do batching in the first place is carbonation. It’s something classic cocktails often deal with, but rarely well. There’s almost nothing better than the first sip of a freshly made mojito on a hot summer day. But there’s not much worse (in cocktail terms, at least) than the limp, listless, watered down dregs left at the bottom after the carbonation is gone. Especially if the bartender used sugar instead of simple. It’s like drinking a grossly tangy simple syrup down there.

So my first goal was to make a mojito that would taste good all the way down, mainly by carbonating it enough that even at the bottom, it’d still effervesce.

Also bartenders often bitch about customers ordering mojitos because they’re time-consuming. I hate this. If you work at a craft cocktail bar, your job is to make cocktails. Not the ones that are easy to make. People can make themselves a perfectly fine gin and tonic at home. It’s your job to give them a delicious drink they couldn’t make at home. Most people don’t have a muddler or know how to use it. They don’t stock mint and soda regularly. (Yes dear reader, I know you do, and it’s why we’re besties.) When I worked at a bar, I never once complained when someone ordered a laborious drink. I did complain when someone asked for a chocolate martini, though only to the other bartenders, but that’s because it offended me as a bartender, a drinker, and a human being, not because it was a pain in the dick to make.

When designing a bar menu, you have to be careful about balance. Too many laborious drinks on the menu at once and you’re going to have long lines and unhappy patrons. And unhappy bartenders because they’re losing out on tips as customers sit, upset, with no drink in hand.

So my second order of business was to put together a mojito that took markedly less labor (no muddling or shaking) that I could serve by the keg at beer speed. Combine that with tasting good all the way through and I think you’ve got a winner.

I also wanted to make a few variants because it’s a cocktail that pairs well with basically all seasonal fruit. In my recent travels to rum-producing parts of the world, I’ve had it with various tropical fruits, and here in the great white north I’ve had it with strawberries, blackberries, etc. They’ve all been delicious.

The batched mojito turned out to be a taller order than I anticipated. The first problem came with the mint. How to get fresh mint into a batched cocktail?

The obvious solution is mint extract. There are several types though. There are peppermint extracts, and spearmint extracts. There are alcohol-based ones, oil based, and pure mint oils that I believe are steam extracted or cold-pressed. Seriously, there are probably a dozen different products that are basically mint in a bottle.

The alcohol ones work right out of the bottle, but they don’t give you the flavor of fresh mint. It’s more of a mint candy flavor. It’s hard to describe the difference, but try them side by side and you’ll see what I mean. It’s not quite right. The taste wasn’t up to par.

The oil-based ones are similar, plus they have the undesired effect of adding oil to your glass. They’re usually extracted in something like sunflower oil that doesn’t stay in suspension even briefly. I could fix that (more on that in a second) but the taste wasn’t much better than the alcohol-based extracts.

The closest thing I could find is 100% pure spearmint oil. Do yourself a favor, wait until you don’t mind tasting nothing but mint for an hour before putting a drop of that stuff on your tongue. That stuff is the real deal. Imagine compressing all of the flavor from an entire sprig of mint into one drop. Then make it oil so it sticks to your tongue like minty-fresh napalm. On the plus side, squeeze one drop of that on your tongue and simple syrup tastes just like a mojito!

My first tests with that, which is what I settled on, involved using a few drops of the oil because I’d been previously using extracts and didn’t realize the difference in potency. Three drops in a whole drink was a mint bomb. Two drops still tasted like chewing on mint leaves.

I think this is similar to how bitters get significantly more potent when allowed to sit, and I think it’s for the same reason. Bitters are also made of flavoring oils, suspended in alcohol. I believe that both when placed into a cocktail full of water come out of suspension and after a day, float to the top where they’re volatilized and you smell them much more.

Anyway if your mojito is sitting around for a day or more, one drop, it turns out, is about the right amount. It’s not quite as minty as some mojitos you order, but it’s really damn close. If you’re batching in volume, I think something like 6 drops per 5 drinks is more like the perfect amount. I still have to play with this to dial it in.

Because mint oil is, well, oil, when it’s in a mojito, which is basically aqueous, it tends to separate. Leave it in a clear bottle for a couple days and you’ll see a thin film form at the top.

Fixing that is easy. Just do what soda makers do: use gum Arabic. The nice thing about gum Arabic is that if you use too much, nothing happens. If I’m doing these one at a time, I just toss a pinch in with the liquid ingredients and shake the crap out of it. If I’m doing a batch, I use a weight equal to that of the oil and take a little more care to hydrate and disperse.

Next up, lime juice. Dave Arnold’s lime acid was where I started. This is pretty good, but not fresh lime. Clarified lime juice is a little better, but still not fresh lime juice. It’s also a pain to make and goes bad quickly. I’ve mentioned it a couple times before, but I developed my fake lime juice (name still to be determined) which is the best solution of all. It tastes closer to fresh lime than clarified lime juice, I think. But really you can use any alternative. I’ll hopefully be selling mine soon.

Then there was the ratio. Here’s where I finally dialed it in:

Mix everything but the gum Arabic together. When doing a big batch, I like to use a 7 gallon food-safe bucket (tall sides prevent splashing) and a stainless steel paint mixer that has only been used for beverages attached to a cordless drill. For small batches, just use a blender or a hand mixer.

With your mixing device running, sprinkle in the gum Arabic. I like to sprinkle it out of a fine mesh shaker. Gum Arabic hydrates under shear, so you want it to get blended in nicely. Just dump it in willy-nilly and you’ll get a big, snotty-looking clump.

Chill and carbonate to 30 psi at 32 degrees. Serve on the rocks. Smack a fresh mint sprig between your hands, basically clapping with it, and use that for garnish.

To make any fruit variant, do the following.

Another option: just buy good stuff that’s already there. I’m not opposed to using packaged products if they’re high quality. Torani’s Signature line is about 65 brix, so use 2/3 ounce of that in place of the simple syrup. They’re all natural, though they add a little bit of acid too so you want to drop your lime juice just a touch. Their white peach is very good in mojito form.

Also, you could instead do a justino with the rum. That’d probably be a great way for long term preservation.