When I say sour mix, what do you think of? Probably this stuff:

If you’re a fan of real, “craft” cocktails, the very thought of it probably makes you throw up in your mouth a little. You probably remember way too many trashy margaritas from the ‘90s or whiskey sours made from it at a wedding.

That’s pretty typical of these things, they’re a cocktail of chemicals with maybe a little oxidized lemon juice mixed in for good measure.

There are, however, reasons for their ubiquity in low-rent bars. These things wouldn’t have been in every bar for three decades if there wasn’t something useful about them right? So let’s break it down into a pro’s and cons list.

Now I’m not really expressing anything controversial here when I say that I believe the first con alone is a deal breaker. (The second one also would be for me personally, but your mileage may vary on the artificial flavors/preservatives.) When craft cocktails came back into circulation nigh on a decade ago, the industry mantra became “fresh-squeezed juices” and for good reason. The alternative was garbage. It actually became a religion to the point where if you mention doing anything sour without fresh citrus, craft cocktail aficionados everywhere will tell you that you’re an asshole unworthy of even your own mother’s love.

But, if there’s one thing I’m known for, it’s a no-sacred-cows philosophy. I think we as bartenders and drink makers should do things because they’re the best way to serve our customers, not because they’re “the way it’s always been done”.

Let’s say someone invented shelf-stable lemon juice. Perhaps that someone built a machine that presses and packages lemons in a vacuum, and uses some mechanical process to make the juice such that it won’t degrade. There are no artificial flavors or preservatives. Just shelf-stable lemon juice that tastes indistinguishable from the stuff you’d squeeze. And because it’s processed by machine rather than by hand, and shipped without all the added weight of the peel, and quality control ensures consistency, and it can be pressed when lemons are in season and thus cheapest, its cost is below that of fresh citrus. Wouldn’t you use that?

I have not developed such a device, but I have developed a lemon juice replacement. I made a lime one too. Both are all natural and do not contain any sweetener. They’re made from mostly citrus byproducts. Oh and probably the biggest benefit: they don’t have any solids in them, so they’re already clarified and excellent for carbonated drinks. Have you ever tasted clarified fruit juice? It’s nowhere near as good as the real thing. Mine is actually closer. Here’s a picture of the Chartruth, from Booker and Dax (which I’ve had at that bar, by the way) using my fake lime. 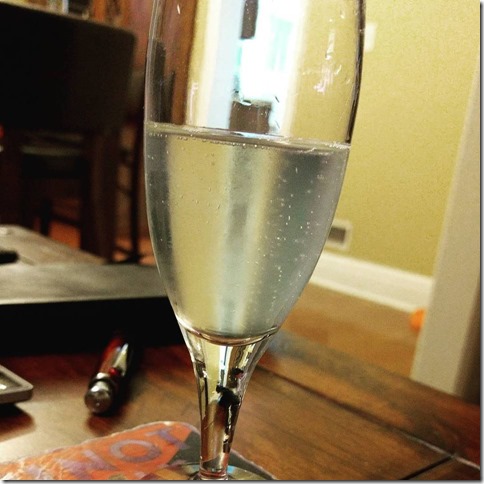 In cocktail use my fake juices routinely tie or even beat real citrus juice in blind taste tests. Seriously, I’ve done several. For those to whom “fresh-squeezed juice” isn’t dogma (i.e. 98% of Americans) they find it equally good. Remember, there are parts of real citrus that taste bad, and you get those when juicing too.

You probably don’t believe me. I don’t blame you. I went into this experiment thinking it might be impossible. I went down to Tales of the Cocktail and there were guys there doing a primitive version of what I’m doing, with a method I had thought of before but not tested, and decided they were onto something but still weren’t quite there. They inspired me to keep moving it forward, and keep testing, but even still I did so thinking “this will probably never work”.

And then I found myself reading old soda manuals from 100 years ago. And some new ones too. I found myself reading papers on citrus juice and preservation. There’s been a decent amount of study done on the topic. Gotta love science! And finally, after dozens of iterations, and tasting more Tom Collinses and Margaritas than I thought possible, I’ve come up with something I’m proud of.

Mine is not nearly as economical as the old school sour mix. Nothing’s cheaper than corn syrup and chemicals. It is much cheaper than actual lemon juice though, but cost was the least of my motivations. I don’t often find myself worrying about my citrus budget.

I developed it to make awesome batched drinks that can last long enough to make them economical. I wanted to be able to make a keg full of whiskey sour for service at a multi-day event or bar. I wanted to make a force-carbonated Tom Collins or Margarita on draft. I succeeded. I served a carbonated serrano margarita with the lime version of it at my launch party and it was the first cocktail to go.

If you have any suggestions, other than “you’re an asshole for trying to replace citrus and I hope you die in a fire!”, please comment them here.