A couple months ago I posted my recipe for a Rosemary Collins. It was basically a Tom Collins that used a rosemary simple syrup instead of the usual plain one. I mentioned in the post that it’d probably make a great modernist drink, and this weekend I decided to test it out.

First I had to clarify the lemon juice. I wasn’t in a hurry (I had a few hours) but I had a lot of things to do and didn’t have the time to devote to agar clarification so I decided to try Pectinex, Kieselsol/Chitosan, and racking/filtering. I’d done that before with lime juice. It does work, it’s just low-yield and requires you to burn through a lot of Chemex filters.

The process is pretty simple really.

3. Stir in 2 grams per liter of Chitosan. Wait 15 minutes. You can see some separation is already occurring.

4. Stir in more Kieselsol, still at 2g/l. At this point I went and did some lawn work and came back maybe a half hour later. It had separated pretty well. 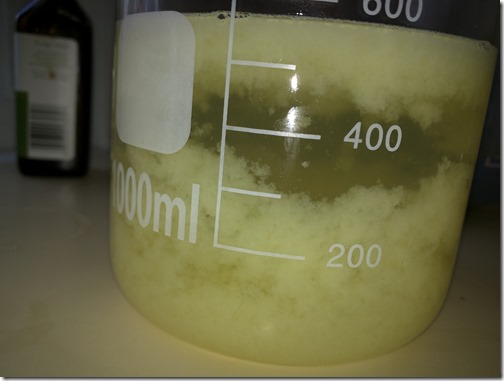 This is the point at which you wish you had a centrifuge. I could see how you’d get a massive yield out of it. But I don’t so I filter through a Chemex.

5. Wet your Chemex filter. Pour about 200ml through. You’ll see a slow, steady stream at first, followed by some dripping, followed by almost complete blockage. At that point you can pick the filter up and massage it a little. It will speed back up. Eventually it will get so blocked that even this no longer helps, just pour what’s left back into the beaker and start again with a new filter. 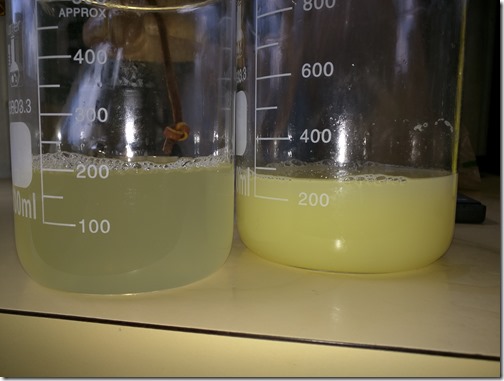 (Clarified on left, obviously, some of the unclarified on right. You can’t really see the Chemex filtering still more in the background.)

My 600ml of lemon juice came out to about 400ml of clarified. I only needed about 250ml for the cocktail I was working on, so I guess I got a little extra.

Then I put the cocktail together. It was:

I put it all in a 2 liter bottle and carbonated to 40 PSI. Usually I’d have done this with gin, and served over the rocks in a Collins glass with a sprig for garnish. But this was for a party and we were drinking out of red Solo cups straight. (Sorry, no pics of the final drink as a result.)

It was quite awesome. Everyone seemed to love it. I’d done basically the same cocktail a couple years ago, when I knew how to carbonate things but not how to clarify, and it tasted good but foamed out and ended up flat. It’s much better for the extra bubbliness you get from clarifying and is a great example of why you shouldn’t try to carbonate unclarified juices.