A bar in my area is having a cocktail contest so I just had to throw my hat into the ring. I wanted to do something a little modernist, but they want to feature the cocktail on their menu when it’s over, so I didn’t want to do anything too far out there. I’m going to assume they don’t have or want to buy any special equipment, so all the fun carbonated drinks are out, and that they don’t want to do anything laborious like agar clarification.

When I first started getting into modernist cocktails, one of the first things I experimented with was rapid infusions. I had an ISI Whip as a holdover from my modernist cooking experiments. It was fall a few years ago, and in Ohio unless there’s a late frost we get a really great stone fruit crop. That year had been cool and cloudy, which meant a horrible tomato crop that nearly bankrupted some of the farmers I spoke to, but a banner year for peaches and plums.

So my first order of business: rapid infusing stonefruits. Thus the Plumhattan was born. It’s exactly what it sounds like, you rapid infuse some whiskey with plums, strain, and then mix with vermouth and Angostura. Ango just goes so well with tree fruits and that drink was such a hit I couldn’t keep plums at home. Every time friends came over I went through a half-dozen. I even planted a plum tree in my yard in hopes I could keep up in the future.

I wanted to take it a step further this year. I love the combination of plum and whiskey. (I made some delicious desserts with the whiskey-soaked plums leftover from the infusions) but want something a little more exciting than just plum in a Manhattan.

So I broke out my trusty Flavor Bible to try to get a feel for a flavor profile. There were a few things you expect. Various spices like anise, cardamom, and cinnamon, that add up to a flavor profile very similar to Angostura. And then some I hadn’t thought off immediately but had tried before, like Cognac and Armagnac. I once made a dessert from the Bouchon Bistro cookbook that was prunes poached in red wine with anise, cinnamon, and honey. Serve that with some homemade vanilla ice cream to a girl you’re dating (or would like to be) and you’re getting lucky, I promise.

So I have a few ideas, but they all start with the prune whiskey. Rather than rapid infuse, because it requires no special equipment and results in a clear product I decided to go with a justino. Anyone with a blender could spend $15 on some Pectinex Ultra-SPL and pull this off, so it seems doable for a small-volume cocktail bar. (I do think for comparison I might buy some plums and rapid infuse, just to see which is better.)

So to start, I took a bottle of 4 Roses Yellow and blended it with some prunes. In Liquid Intelligence, Dave Arnold recommends using dried fruit so you get more fruit flavor with less water. Plums aren’t in season yet, and prune plums are tastier than the rest anyway. 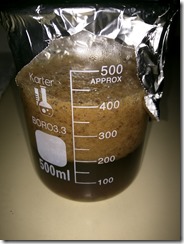 So I mixed 500 grams 4 Roses Yellow with 125 grams plums and of course 2 grams Pectinex Ultra-SPL. I blended the ever-living shit out of it, because plums are pretty meaty. I had to stop at one point because the Vitamix was blending it so much that it was getting warm and I didn’t want the alcohol to start evaporating. It separated so fast I’m not sure you even need the Pectinex, but if it contributes even a little to clarity it’s worth it. So unlike most Justinos where those of us without a centrifuge have to cross our fingers and hope it separates, I could have been done an hour later. But I wanted maximum flavor infusions so I let it sit for a week and then strained through a coffee filter.

The straining was rough. Some of the solids had gone to the top and some to the bottom, so I wasn’t able to rack the liquid off of them very well. They clogged even just  fine mesh strainer. I strained them through fine mesh, then through multiple changes of cheesecloth, then through coffee filters. The process took a really long time, though not much active work. Next time I’ll take a spoon and try to scoop the puck of solids off the top.

And here we are, plum whiskey. I’ll talk in future posts about what I end up doing with it. My ideas right now are:

2. Something paired with brandy. I’m not entirely sure where this line of thought is going to take me. But I like Cognac and the good book says they pair well together. I have this notion in my head that the combo is going to taste good with Nonino, and I can’t even tell you why. I could be way off base.

3. Something with absinthe. Anise + plum = yummy. That’s like basic food math. I feel like there’s something to be found loosely based on a corpse reviver #2 or a sazerac here.

Ideas would be greatly appreciated as well. I really don’t know where exactly to go with this one yet.