This is part of my Weekend Classics series of recipes that use entirely classic cocktail ingredients/methodology.

Spring is in the air. Or at least it was for like a week. Now it’s snowing again. But I’m all about mind over matter, so this week’s classic cocktail is going to be something light and airy because, let’s be honest, we all can use it after the winter we just suffered through. So put on your Bermuda shorts and crank your thermostat to 85 and get ready for this week’s classic cocktail.

One of my favorite drinks for when it’s patio season is the Tom Collins. It’s simple, elegant, and delicious. It’s just a boozy lemonade with bubbles. It simultaneously satisfies your inner child and the grownup who’s got his mind on the impending tax season.

The basic recipe is as simple as it gets when cocktailing.

Shake and strain into a Collins glass filled with ice and top with soda (roughly 4 oz.) and give it a very brief stir. Garnish with a lemon wheel. I like to serve it with a straw, because I don’t want to stir the bubbles away, but if you don’t you end up drinking all soda followed by all booze.

While I haven’t had the chance to do it yet, this would also be a perfect cocktail for a modernist version. I’d just clarify the lemon juice, mix it up with water instead of soda, and chill and force carbonate and serve in a bottle. That’d be easy and get you both a bubblier finish and good mixing. (One of my earliest attempts at modernist mixology was force carbonating the variation I’m showing below, but I did not yet know how to clarify lemon so it foamed out, though even still it was better than with soda.)

This week I decided to try a very simple variation: the Rosemary Collins. It’s the exact same as above, except you use rosemary simple instead of plain. And you garnish with a rosemary sprig because even though that’s so played out in New York the rest of the country still hasn’t seen it. If you live in Manhattan maybe use a pinecone instead or something. 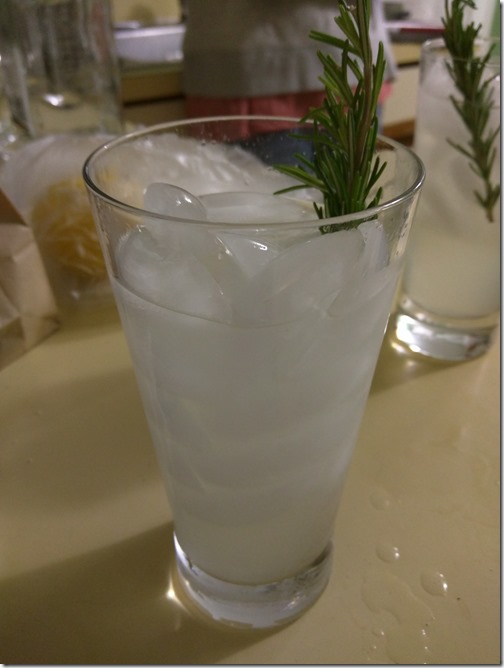 Here’s my recipe. The first two steps, blanching and shocking, should always be done when you’re going to heat anything green to prevent it from turning brown. This same process will work for any herb, though you may need to mess with the ratios a bit.

1. Fill a large pot with water and bring to a boil. While it heats, fill a container with ice water.

2. With a long pair of tongs, hold the rosemary in the boiling water for 30 seconds, keeping it fully submerged. When the 30 seconds is up, plunge it in the ice bath. Let it sit there until cold.

3. Add the water, sugar, and rosemary to a small pot. Place over high heat. Bring to a boil, then turn the heat off.

4. Let the rosemary steep in the simple syrup until they cool to room temperature. Then strain the simple to get rid of any loose rosemary.