One question I see often on Reddit Cocktails is what bar equipment someone starting out should buy. There is a rather bewildering array of stuff out there, but very few things you actually need. Even in those necessities, however, there exist many variants. So I thought I’d write up a series to get you pointed in the right direction.

First up, shaking and straining. Most cocktails that aren’t all liquor require one (and usually both) of these.

There are three main types of shakers on the market. 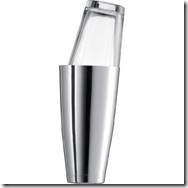 These are very cheap. Here’s one on Amazon for $6. You might break a pint glass every now and then, but what’s that, $1? Also, you can get a cheater tin to replace the pint glass: 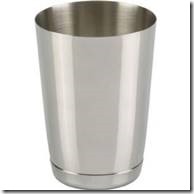 The downside is that your method of shaking them has it right by your ear. For a home bartender you’re probably not doing that enough to matter, but for a professional this constant percussion can cause tinnitus. If I were bartending full time I’d prefer another method just for that reason. 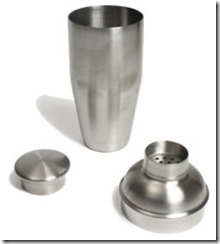 The Cobbler is a 3 piece shaker. When assembled, it looks like this:

The primary benefits to a Cobbler are that you don’t need a Hawthorne strainer, and that you have more freedom with how you hold it. That’s why people doing the bad ass Japanese Power Shake don’t use a Boston shaker. That also means it doesn’t have to be right by your ear.

The downsides are that you have 3 pieces to deal with, and the top piece is a little more annoying to clean than a pint glass. And the cap often freezes onto the top piece after you shake. It can be a pain to remove, and you often give up and just use a strainer anyway. That’s why my personal favorite is the…

It’s like a Cobbler Shaker, except the top is just one piece. You still have to use a Hawthorne Strainer, like you would with a Boston. But you were going to do that with a Cobbler anyway once the cap froze. And it’s similar shape to the Cobbler means you can Japanese Power Shake all night. (Sounds dirty, doesn’t it?)

Whichever shaker you go with, the basics are all the same, so grab the one that appeals to you the most and then don’t worry about it.

Ok, so now we’ve got our shaker. Whichever one you choose, you’re going to have to strain most of the stuff that comes out of it.

A barman’s best friend. I don’t know who Hawthorne was, but he’s the reason you don’t have ice in your Negroni, so if you see that guy give him a hug. These cost under $5 at Amazon. 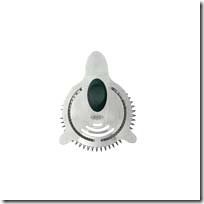 For a couple bucks more, OXO makes one without a handle that I quite like. I just like the way it feels in my hand a little better. I wouldn’t go throwing away my old Hawthornes for it, but if you don’t already have one, it’s worth the extra $2.

This bad boy is for making juleps. ‘Nuff said. Not a necessity, but also it’s only $4.47 and everyone loves a julep. It also works just fine for most stirred drinks if you’re using large enough ice cubes that it will hold them in the stirring glass. 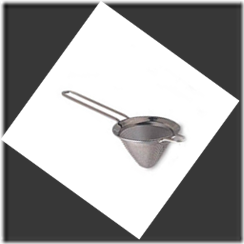 While a Hawthorne is great at holding back ice, it’s too large to hold back anything finer. Since nobody wants lemon pulp in their Tom Collins, you should have a mesh strainer.

The good news is they’re also cheap. This one is currently $7.45 on Amazon.

When you shake something with a pulply fruit juice like citrus, or muddle something like mint, or whatever else small that you don’t want in the final drink, pour it through both a Hawthorne and this bad boy.

And for the record, yes those are Amazon affiliate links. Each one I linked to I have purchased and highly recommend. Even if you buy them all I think I get like $2, so please don’t think I am trying to rip you off dear reader.