Sometime last year, after learning about a fat-washing, I woke up with three words in my head: brown butter rum. As with most great ideas I thought I had invented, I plugged it into Google to find it had been done before. My process for making it is a little different, and I’m going to try to compare the two side by side one day soon, but either way the results were fantastic.

I never really figured out a cocktail I loved with it though. The obvious Dark and Stormy was pretty good, and one friend who tried it requests it every time I see her. But I felt like there was something more.

And then the Apple Cocktail Challenge occurred. It’s fall, and I live in the Midwest, so a hot toddy seemed appropriate. Mulled apple cider is a big drink around here. We even have an annual cider festival.

So for the Apple cocktail challenge, I wanted to come up with an apple hot toddy, and brown butter rum seemed like the ideal spirit. I tried a few different incarnations, from rapid-infusing the rum with apple slices in an ISI Whip and adding to tea, to mixing with bourbons and vermouth and hot water, but the best one of all was the one based on cider.

I also noticed long ago that Angostura bitters taste a good bit like mulling spices. They really jazz up this recipe quite a bit. My next fall cocktail is going to use pumpkin pie puree, and I’ll probably use a lot of Angostura in that one too.

In a past life I was a professional poker player. When I first got started, most of the games in my area were run from (and often full of) guys from a local town called Rittman. They played a lot of crappy hands, but for some reason 8-5 offsuit was the one we named after them. And 8-5 suited was called Rittman Heights.

The two big apple orchards in the area are in Rittman, so I thought it only fitting that I name after that legendary hand and the shady cast of characters who played it so poorly. And because of the foam, this feels more like the suited variant.

And so I humbly submit to you…

Combine cider, 2 cinnamon sticks, orange and lemon peels, Angostura, and maple syrup in a pot. Bring to a gentle boil, reduce heat to low and let simmer for 20 minutes.

Pour 2 oz. rum into each of four 12 oz coffee mugs. Pour the mulled cider over the rum and stir with a cinnamon stick. Leave the stick in as garnish and top with caramel foam.

In a saucepan over medium heat add butter and cook, swirling occasionally, until butter turns brown and has a nutty aroma.

Pour butter into a quart canning jar or other wide mouth, non-reactive container. Pour the rum in slowly as it will spatter and foam at first. Put the cap on and shake.

Set a sauce pan full of water over low heat. Set the jar in it. Shake every five minutes for an hour. 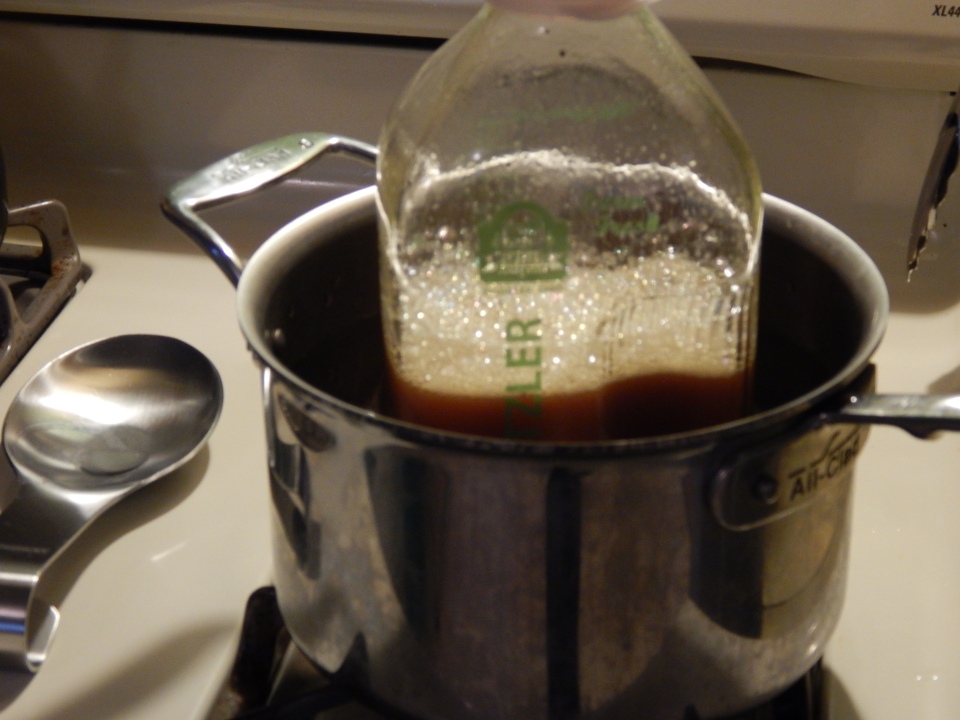 Place the jar in the freezer. Let the fat freeze, then strain the liquid, first through a mesh strainer lined with cheesecloth, then through a coffee filter.

Ingredients (makes enough for about 12 toddies)

2 large egg yolks (reserved from above)

Combine the sugar and water in a small saucepan and cook, without stirring, over medium heat until the sugar has dissolved and the caramel turns a light golden brown.

Meanwhile, whisk the egg yolks together in a bowl. Heat the heavy cream and milk together until hot. Remove the caramel from the heat and whisk in the cream mixture. Whisk the mixture over low heat until any lumps of caramel have completely dissolved and the caramel is smooth. Gradually whisk the caramel into the egg yolks, and return to the saucepan. 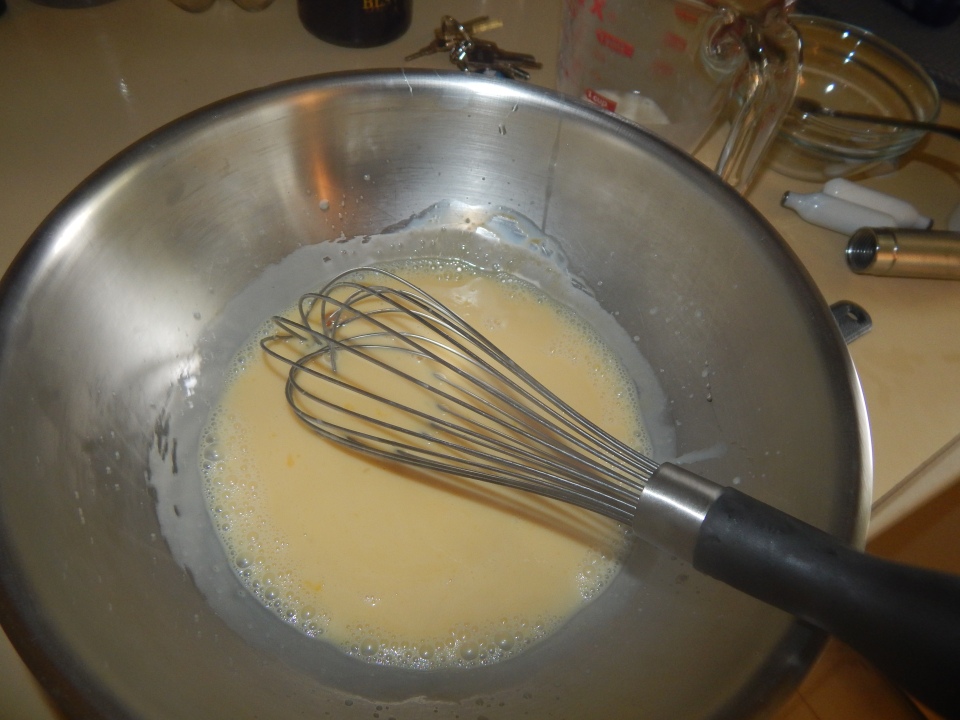 Cook the sauce over low heat until it reaches 183°F (84°C). Remove from the heat and add the gelatin, whisking until it dissolves. Strain through a fine-mesh sieve into a bowl and chill in an ice bath, then pour into 1L ISI Whip and refrigerate until ready to use.

Charge with 2 canisters of nitrous, shake vigorously, and serve.

*Note: I used 200 bloom (gold) gelatin and it seemed like maybe just a tad much. I’d probably drop down to 170 bloom (silver) next time. I don’t have Le Bernardin’s book and found this on the web so I don’t know if they specify.